You are here: Home Europe
At least 27—and likely more—legally-resident Third World immigrants and others pretending to be refugees—have been arrested in police swoops across Western Europe since December 1 for planning terrorist attacks over the Christmas period.
The arrests prove beyond doubt the link between the Third World invasion and terrorism—even though the race-denying establishment continues to pretend otherwise. 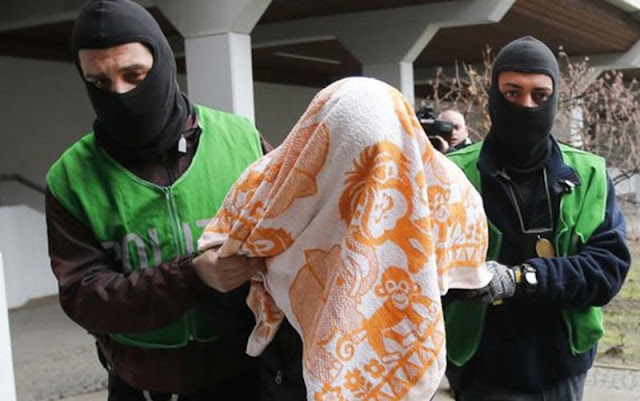 On December 11, French police arrested eleven invaders for helping to arm the Tunisian invader who killed 86 people by driving his truck into a crowd in Nice on Bastille Day 2016.
The arrests come five months after Tunisian extremist Mohamed Lahouaiej Bouhlel drove a 19-ton truck into a crowd on the Nice seafront, the most recent in a series of attacks by “refugees” and other legal Third World migrants in that country over the previous year.
Previously, a further six invaders were arrested and charged for aiding Bouhlel.
Just two days earlier, authorities in France arrested a sixth invader in what police described as a “thwarted plot to attack several sites in the metropolitan area of Paris, including the Champs Elysees and Disneyland Paris.”
The 31-year-old suspect has been placed in preventive detention and accused of cooperation with “criminal terrorists” and of having supplied weapons to his accomplices.
Five other invaders—all legal Third World immigrants to France—are already in custody after being arrested in November in the nonwhite overrun southern port city of Marseille and in Strasbourg in northeast France. The would-be attackers were all linked to ISIS, investigators said.
Nonwhite terrorists have killed more than 230 people in Islamist attacks in France since January 2015, including 130 in coordinated gun and suicide bomb strikes in Paris in November 2015.
In Britain, police have arrested six invaders in Derby, Burton on Trent, and London on December 12 for “engaging in preparation of act of terrorism” which entailed a “significant plot to attack” the U.K.
Materials recovered from the address in Derby indicated that the attackers were preparing explosive devices. Counterterrorism officials have disrupted three major attacks in Britain this year.
Meanwhile, two legally resident Third Worlders were arrested in separate incidents at Stansted Airport, located about 30 miles outside of London.
A 41-year-old was arrested after arriving at the airport on Friday, December 10, for an offence under the Terrorism Act. Police said the “arrest is related to suspected travel to Syria.”
(This latter admission means that it is possible to travel freely to and from Syria, making a mockery of the claims that “Syrian refugees” are genuine.)
Five days earlier, a 49-year-old Third World immigrant—living in south Essex—was arrested at the same airport on suspicion of preparing for a terrorist act. He had been travelling back from Istanbul, Turkey.
In the Netherlands on December 9, Dutch police arrested a 30-year-old nonwhite invader in Rotterdam for planning a terror attack, according to the Interior Ministry.
He was arrested while in possession of an AK-47 Kalashnikov assault rifle with two full magazines, and four boxes of highly explosive illegal fireworks which were apparently being dismantled and the gunpowder used to make explosive devices.
Police also seized a large painting with an image of a flag used by ISIS, mobile phones, and €1,600 in cash.
In Sweden, a Syrian refugee-invader was arrested on December 6 for carrying out an arson attack on a Shi’ite prayer room in the nonwhite-overrun city of Malmo.
Immigration officials said the invader had arrived in Sweden in 2015, and had received a three-year residence permit just three days after he carried out the arson attack.
In Germany, on December 12, two invaders aged 15 and 17 were arrested near the city of Aschaffenburg for planning an “Islamist-motivated attack on a public institution.”
A police statement said that searches of the invaders’ residences had produced “Islamic propaganda materials, IS flags, electronic data carriers, and mobile phones.”
In what is now standard procedure by the German authorities in trying to explain away the behavior of the refugee-terrorists who have flooded the country, the police statement also contained an obligatory ending remark that there were “indications of mental illnesses” in the arrested pair.
On December 2, German police arrested a 20-year-old Afghan invader in the southwest German state of Rhineland-Palatinate for being a Taliban soldier who had entered Germany as a “refugee” this year.
The arrest came only two weeks after the police in nearby Bavaria detained another 17-year Afghan “refugee” on similar charges.
In the latest incident, a 12-year-old Iraqi invader—a legal resident of Germany with dual Iraqi-German citizenship—was arrested after a nail bomb he had constructed was spotted at a Christmas market in Ludwigshafen on December 5.
Reports revealed that the invader-terrorist had tried to set off the device on November 26 at the same market, but it had failed to go off.
He had tried once more on December 5, but a passer-by spotted the explosive device, hidden in a rucksack filled with nails, and alerted the police. A controlled explosion was carried out.
The invader, who was born in Germany in 2004, had been tutored in the attack by online contact with ISIS in Syria, police said. Because he is under the age of 13, he will not be charged and instead has had “youth workers” assigned to “care” for him.
The same day, German police in Karlsruhe arrested a Tunisian invader, identified as Charfeddine T., for planning an ISIS attack in that city.
The 24-year-old invader arrived in Germany in October 2015 pretending to be a refugee, under instructions from ISIS to help prepare an attack.
A police statement said that the invader had been in contact with an ISIS handler in Syria responsible for running the group’s operations abroad and had requested permission to carry out his mission.
Police also revealed that the Tunisian had a fake Syrian passport and had applied for asylum as a “Syrian war refugee” with the name Ashraf al-T.