France’s Front National presidential election candidate Marine le Pen’s election manifesto has called for a referendum on European Union membership, the end of the “asylum” swindle, the expulsion of Islamists, the halting of most legal immigration, and legal changes to ensure that French citizenship can only be acquired through blood or naturalization—and the conditions for the latter to be “tightened.” 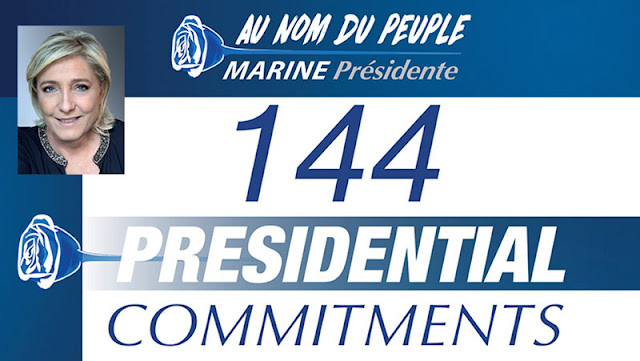 Le Pen, currently front-runner in the opinion polls to win the first round of the French presidential election, made history by releasing her official 144-point manifesto in English specifically with the intention of explaining her policies to the outside world.
The English version is a direct translation of her major French-language election communication, and offers English-speakers a unique insight into the policy positions which have made her the single most popular politician in France.
Le Pen’s first commitment is to hold a referendum on continued French membership of the European Union.
“The aim is to arrive at a European project that respects French independence, national sovereignties and which serves the interests of the different people,” she wrote.
The manifesto also calls for the “automatic expulsion of foreign criminals and delinquents” and the signing of bilateral agreements so that convicted foreigners can serve their prison sentences in their country of origin.”
Le Pen has vowed to “restore [France’s] national borders and leave the Schengen Area,” and to “make it impossible to legalize or naturalize undocumented foreigners.”
She has also voted to “end automatic family reunification and regrouping as well as the automatic acquisition of French nationality by marriage” and to “abolish policies that attract immigrants.”
Significantly, the manifesto calls for the abolition of the principle of jus soli (“right of the soil”), saying that it “will only be possible to acquire French nationality by filiation or naturalization, the conditions for which will be tightened.”
It also calls for a “return to the original spirit of the right of asylum which, furthermore, will only be granted after the filing of an application in French Embassies or Consulates in the countries of origin, or bordering countries.”
The manifesto also calls for the banning and dissolution of all “organizations of any nature with ties to Islamic fundamentalists,” and for the expulsion of “all foreigners with ties to Islamic fundamentalism.”
All “extremist mosques identified by the Ministry of the Interior” will also be closed and a ban placed on “foreign funding of places of worship and their personnel”—a direct reference to the fact that the Saudi Arabian government is behind the financing and building of mosques throughout Europe.
Le Pen has also called for the “stripping of French nationality,” the “expulsion and [the] banning [of] re-entry into the country for any person with dual nationality linked to a jihadi organization.”
The manifesto also calls for the restoration of “genuine equality and a meritocracy by refusing the principle of ‘positive discrimination’”—a direct reference to so-called “affirmative action” which is merely an excuse for anti-white discrimination.
The manifesto contains a wide variety of other policy positions ranging from the economic to the social, and includes the call to bring in referenda as a major tool for shaping government policy—and the constitution.
Le Pen has also undertaken to “guarantee freedom of speech and digital freedom by adding them to the fundamental freedoms protected by the Constitution,” while at “the same time, to simplify procedures enabling victims to seek redress for defamation or insult.”
This is a clear reference to the strict anti-freedom of speech laws which the establishment parties have brought in over a period of many years, all with the intention of criminalizing any opposition to their plans to destroy France through Third World immigration.
As Le Pen wrote in the introduction:

“As you are aware, this election will confront two visions. The ‘globalist’ choice on the one hand, which is the vision shared by my all my adversaries, which seeks to destroy the economic and social balances in our society, which wants to abolish all borders—economic and physical—and which wants ever more immigration and less cohesion between the French people.
“On the other hand, there is the patriotic choice, which I am representing in this election, which places the defense of the nation and the people at the heart of all public decisions and which, above all else, wishes to protect our national identity, our independence, the unity of the French people and the prosperity of all.
“This choice between two basic visions is the choice that you will be facing—it is a choice of civilizations. And it is one that will govern our children’s future.”