You are here: Home All News
The smugglers engaged in setting up the swarms of boats carrying fake refugees across the Mediterranean Sea into Europe are actively colluding with crews on “rescue ships” to facilitate the invasion, it has emerged. 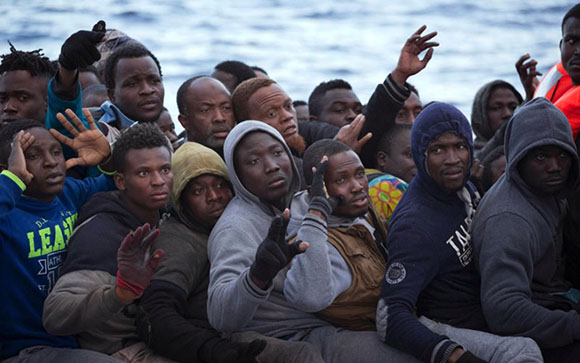 News of the collusion—which takes the form of the smugglers advising “rescue” ships run by charities and the European Union by radio of the invasion boats’ position, was revealed by the chief prosecutor of the Sicilian port city of Catania, Carmelo Zuccaro.
Speaking to La Repubblica, Zuccaro said that there was “direct communication between Libya-based smugglers and members of charity-operated rescue vessels.”
NGOs often work in the vicinity of the coast of Libya,” Zuccaro said. “We calculated that in the last four months of 2016, at least 30 percent of rescues landing in Catania [Sicily] were carried out by those organizations; in the early months of 2017 that percentage has risen to at least 50 percent.”
He added that the largest number of these charities came from Germany, and that the costs of running these operations was at least €11,000 per day, per ship.
The charities said that the charities “deny any wrongdoing, saying they are simply looking to save lives”—a direct admission that the allegations are true.
The smugglers have perfected the system. They load up barely sea-worthy boats full of Africans and other nonwhites on the Libyan coast, often with only enough fuel to reach 50 or 100 miles out to sea.
The smugglers then advise the charities of the location and direction of the boats, knowing very well that the charities will pick up the invaders, or advise nearby EU fleets.
Either way, the invaders get a safe trip to their destination, blankets, meals, and accommodation. The AFP reported that as of last weekend, the charities and EU navy units had in this way transported at least 22,000 African invaders directly to Italy.

Zuccaro said that the “humanitarian ships operating off Libya were undermining the fight against people smugglers.”
A parliamentarian with the anti-invasion Northern League party, lawmaker Paolo Grimoldi, was quoted as accusing the charities of running a “taxi service,” bringing the invaders straight to Italy rather than to closer nations, such as Tunisia and Malta.
“If the government does not decide to put a brake on these NGO boats, we will find ourselves overrun by tens of thousands of African immigrants by the end of the year,” Grimoldi said.
The activities of the charities and EU navies in helping the invasion was first raised by the Dutch-based Gefira think-tank in December last year.
For two months, Gefira reported, they monitored the movements of ships owned by a number of the charities, using marinetraffic.com and data provided by the United Nations High Commission on Refugees (UNHCR).
“It turned out we were witness to a big scam and an illegal human traffic operation,” Gefira reported.
“NGOs, smugglers, the mafia in cahoots with the European Union have shipped thousands of illegals into Europe under the pretext of rescuing people, assisted by the Italian coast guard which coordinated their activities,” the report continued.
“Human traffickers contact the Italian coast guard in advance to receive support and to pick up their dubious cargo. NGO ships are directed to the ‘rescue spot’ even as those to be rescued are still in Libya. The 15 ships that we observed are owned or leased by NGOs, and have regularly been seen to leave their Italian ports, head south, stop short of reaching the Libyan coast, pick up their human cargo, and take course back 260 miles to Italy even though the port of Zarzis in Tunis is just 60 miles away from the rescue spot.”
Gefira named the organizations involved as the Migrant Offshore Aid Station (MOAS), Jugend Rettet, Stichting Bootvluchting, Médecins Sans Frontières (Doctors without Borders), Save the Children, Proactiva Open Arms, Sea-Watch.org, Sea-Eye, and Life Boat.
During the two months of the Gefira observation, they monitored at least 39,000 Africans illegally smuggled into Italy, all done with the full consent of the Italian and European authorities.