14,094 North Africans and sub-Saharan Africans invaded Spain in 2016, a figure nearly 4,000 larger than the Moorish army which invaded that country in 711 A.D., it has emerged. The 711 invasion led to an 800-year Muslim occupation of Iberia. 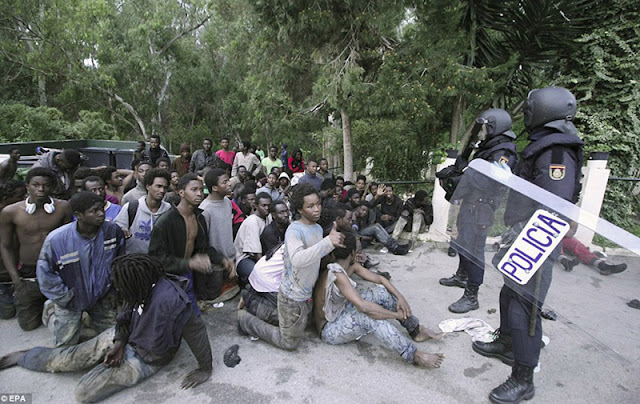 According to a new report by the United Nations High Commissioner for Refugees (UNHCR) titled “Spain Arrivals Dashboard January–December 2016,” the 14,094 strong invasion force consisted of 5,932 land invaders, and 8,162 sea invaders.
In 711 A.D., the Moorish armies under Tariq bin Ziyad, a new convert to Islam from the Berber tribe of Algeria, comprising 300 Arabs and 10,000 Berber converts to Islam, landed at Gibraltar after crossing from North Africa.
The Moorish armies swept through much of Spain, and were only finally halted in their drive to conquer all of western Europe by the Frankish king Charles Martel at the Battle of Tours in October 732.
According to the UNHCR figures, all land invaders entered either through the enclave of Melilla (3,831 persons, 65 percent of the total who came by land) or Ceuta (2,101 persons of 35 percent of those who came by land).
In 2016, most sea invaders disembarked at the Spanish mainland, after being rescued in the Mediterranean by Spanish and EU fleets. 6,305 disembarked on the Andalusian shores, while 674 disembarked on the eastern coast.
Sea invaders to the Canary Islands (672) as well as to the enclaves of Ceuta (441) and Melilla (70) were also recorded in 2016.
In 2016, most sea invaders originated from western African countries, namely Côte d’Ivoire (1,772 persons, or 22 percent), The Gambia (898, or 11 percent), Guinea (1,029, or 13 percent), and Cameroon (677 or 8 percent).
Other sea invaders came from northern Africa, particularly Algeria (1,602, or 20 percent) and Morocco (674, or 8 percent). As in previous years, 2016 sea invaders were predominantly young men (83 percent).
n 2016, land invaders predominantly originated from Syria (1,925, or 32 percent). 70 percent of Syrian invaders were women and children who traveled by land to Melilla in North Africa.
Other land invaders originated from Guinea (1,604, or 27 percent), Algeria (792, or 13 percent), Cameroon (393, or 7 percent), Morocco (194, or 3 percent), and the Occupied Palestinian Territories (174, or 3 percent).
Most land invaders originating from sub-Saharan African countries were young men who jumped over the border fences. Women and children traveling by land most commonly hid inside vehicles crossing the border.
In 2016, the five most common nationalities of sea and land invaders to Spain were Syria (9,121, or 30 percent), Guinea (4,846, or 16 percent), Algeria (4,113, or 13 percent), Côte d´Ivoire (2,641, or 9 percent), and Cameroon (1,888, or 6 percent).
While Guinean invaders remained comparable to 2015, Ivoirian invaders have increased significantly. On the other hand, while Syrian invaders had decreased toward the end of 2015, they have been increasing again since August 2016, with monthly invaders averaging 250.
The Western Mediterranean route has thus become the second most frequently used EU entry point for Syrians traveling by land, the UNHCR report concluded.