The German state’s hopes of banning the National Democratic Party appear to be fading as the Karlsruhe Constitutional Court nears its final ruling on January 17, liberal German media has admitted. 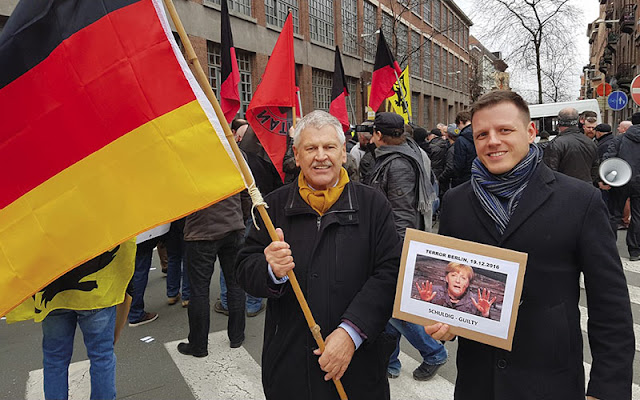 A recent NPD demonstration in Berlin against granting of an honorary doctorate to Angela Merkel.
Der Freitag newspaper—a leftist journal with close links to Britain’s Guardian newspaper—said in a new article that “there is currently no question of optimism” on the case—that is, there is little hope that the banning attempt will succeed.
The legal effort to squash Germany’s only nationalist party was launched in March 2016, when the governments of all sixteen federal German states, governed by the establishment parties—the Christian Socialist Union (CSU), Christian Democratic Union (CDU), Socialist Party of Germany (SPD), the Greens, and the Left (Die Linke, the former East German Communist Party)—started their combined effort.
According to Der Freitag, the federal government did not want to get involved in the effort, because it “seems to have little hope.”
In addition, however, the “federal states are now also expecting a defeat.”
To console its readers, Der Freitag went on to add that “in the event of a failure, however, the state’s disgrace would not be as great as in the first attempt.”
This refers to the 2003 attempt to ban the party which failed after it was revealed that the internal state security agency had been responsible for generating the “evidence” through its planted agents within the party.
The revelations were, Der Freitag said, “a political disaster for the red-green federal government, and above all for its then interior minister, Otto Schily.”
The latest attempt to ban the NPD comes after “attempts were made to increase the chances of a successful ban by removing all the informers” from within the party.
Now, it seems, there is not enough “evidence” to convict the party, and, Der Freitag added, there is a “new legal problem,” namely that it is “questionable whether a prohibition would also stand before the European Court of Human Rights.”
For such a prohibition to make it past the European court, there has to be a “concrete threat to the state,” and, Der Freitag admits, the German constitutional will “probably be guided by this.”
The paper goes on to lament the fact that “a few years ago, the chances of banning the NPD would have been greater as the party won seats in all the East German regional parliaments.”
Since the party has lost most of those seats in later elections, the “threat” has apparently subsided—in other words, the “democrats” of the German political establishment were only really concerned that Germans might stop voting for them.
In its reaction, the NPD said the court case was “not just about the party, but about fundamental rights such as freedom of expression and freedom of assembly. A whole range of opinions, from criticism of mass migration and of alienation, and the demand for German national sovereignty, are being put to the test.”
“If the ban on a comparatively small party like the NPD succeeds,” the official statement continued, “everyone will have to think carefully about what they might say in this allegedly free country. Any patriotic party, any national club, could he held by the same standard.”
The party also confirmed that no matter what the outcome of the case, its “functionaries, members, and sympathizers will continue their political struggle for a free and German homeland. NPD members are well accustomed to the political home which they have chosen, and are used to being banned from work, schools, and universities, and have never let this stop them before.”
“We regard it as the highest duty of every German to stand up for the future of our own people. This will not change after January 17!” the party statement ended.