Austria’s Freedom Party (FPÖ) has laid out its election platform for the 2018 elections early, with party leader Heinz-Christian Strache calling for zero immigration, a ban on “fascistic” Islam, a minimum wage of €1,300 and a minimum pension of €1,100 per month. 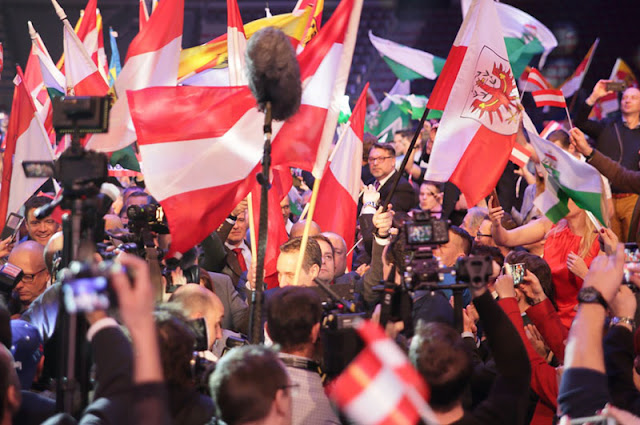 Speaking during his party’s now traditional New Year’s rally in Salzburg, Strache also said that Austria was committed to the European Union but that that organization “must reform because of failures in its migration policies.”
Strache also described Islam as “misogynistic” and as having “a fascistic worldview” during his two-hour speech before at least 4,000 supporters, many of whom had braved a severe snowstorm to attend.
Austria should “quickly put an end to this policy of Islamization… otherwise we Austrians, we Europeans will come to an abrupt end,” Strache said.
He also mapped out plans to improve Austria’s social economic standing, with a minimum wage of €1,300 a month and a minimum pension of €1,100.
He also called for access to Austria’s labor market to be restricted to Austrian nationals first.
With regard to the ongoing asylum racket, Strache said that what Austria needs is “zero immigration, actually minus immigration, because all illegal individuals and criminals belong outside of the country.”
Austria had around 90,500 first-time “asylum applications” in 2015—making it the third-highest country for such applications in Europe that year.
Although the number of applications more than halved in 2016—to “only” 42,100, the numbers are still twice as large as in 2014 and almost three times higher than in 2013.
In December 2016, the FPÖ’s Norbert Hofer—who also spoke at the rally—lost the presidential election, but still polled over 2.2 million votes. Current opinion polls show that the FPÖ is far away the single largest party, but is just short of a complete majority in the Austrian parliament.
The party is however looking to the next elections in 2018 as a breakthrough year, with Strache saying that the “time is ripe” for an FPÖ victory and that the party’s campaign message will be based on “security, direct democracy, migration, and social justice.”