You are here: Home All News
A top producer at CNN has admitted in a secretly-recorded conversation that the media hype about collusion between Russia and the Trump election campaign “influencing the US presidential election” is completely false, even though it is still being pushed by the controlled media. 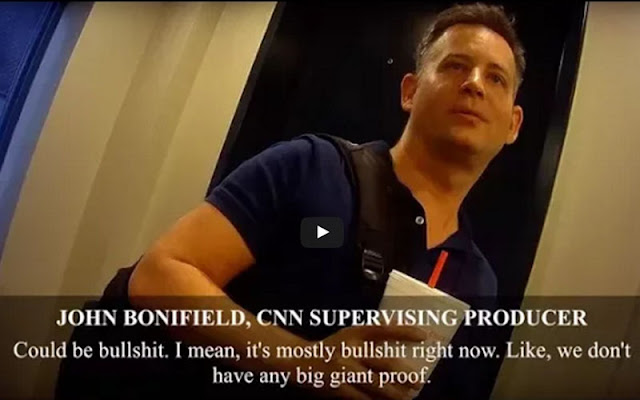 In a conversation captured on film by undercover investigative journalists at the Project Veritas news site, CNN Supervising Producer John Bonifield was caught on hidden-camera admitting that there is no proof to CNN’s Russia narrative.
“I mean, it’s mostly bullshit right now,” Bonifield says. “Like, we don’t have any giant proof.”
He confirms that the driving factor at CNN is ratings:
“It’s a business, people are like the media has an ethical phssssss…All the nice cutesy little ethics that used to get talked about in journalism school you’re just like, that’s adorable. That’s adorable. This is a business.”
According to the CNN Producer, business is booming. “Trump is good for business right now,” he concluded.
Bonifield further goes on to explain that the instructions come straight from the top, citing the Jewish CNN CEO, Jeff Zucker:
“Just to give you some context, President Trump pulled out of the climate accords and for a day and a half we covered the climate accords. And the CEO of CNN (Jeff Zucker) said in our internal meeting, he said good job everybody covering the climate accords, but we’re done with that, let’s get back to Russia.”
Bonifield also acknowledged: “I haven’t seen any good enough evidence to show that the President committed a crime.” He continues:
“I just feel like they don’t really have it but they want to keep digging. And so I think the President is probably right to say, like, look you are witch hunting me. You have no smoking gun, you have no real proof.”
Project Veritas’s James O’Keefe said in his commentary that to “report not on facts, but instead on narratives that yield high ratings, is exactly the definition of fake news.”

The documentary by Project Veritas comes on the heels of upheaval at CNN following a retracted story linking Anthony Scaramucci, an associate of Trump, with a $10 billion Russian investment fund. The story was deleted shortly after it was posted. CNN later issued a retraction notice and apologized to Scaramucci in a brief editorial note.
Thomas Frank, Eric Lichtblau, and Lex Haris, the three CNN journalists who worked on the story, resigned on June 26. The resignations came just three days after the story was pulled.