You are here: Home Americas
Trump has not only refused to revoke Obama’s “Deferred Action for Childhood Arrivals” (DACA) program—as he promised during his election campaign, but he has granted residence to 13,436 illegal aliens who had not been amnestied by Obama. 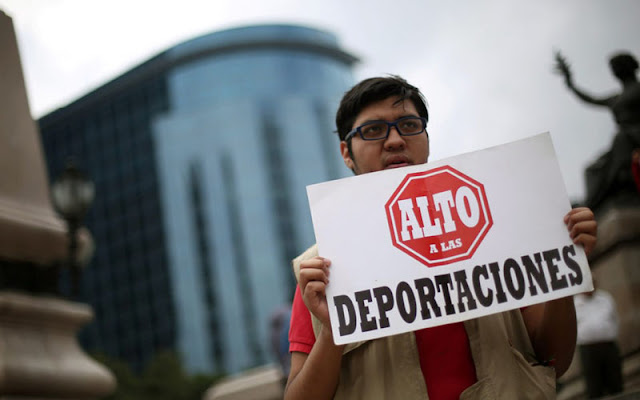 Trump’s overt betrayal of his voters was detailed by Mark Krikorian, Executive Director, Center for Immigration Studies (CIS), in a new update on that organization’s website.
According to Krikorian, Trump “lambasted Obama’s unilateral amnesty program as illegal and pledged to stop it on day one” during the election campaign.
“But not only did he not stop it, DHS [the Department of Homeland Security] has continued to process renewals and even new applications, for illegal aliens who did not already have this two-year renewable work permit,” Krikorian continued.
“Try as I might, I couldn’t get anyone at U.S. Citizenship and Immigration Services (USCIS) to tell me how many illegal aliens Donald Trump has amnestied since taking office.
“You won’t be surprised to learn that they picked Comey-Palooza Day to release the data on the second quarter of FY 2017, meaning January through March.
“It shows that during the first three months of this year, USCIS has approved 107,524 DACA renewals and 17,275 new applications.
“Of the 90 days in the January to March period, 70 of them have been on Trump’s watch, or about 78 percent.
“Assuming a constant rate of processing, that would mean Donald Trump has given access to work permits, Social Security numbers, driver’s licenses, EITC, and more to 13,436 illegal aliens who had not already been amnestied by Obama. That’s an average of 192 new illegals a day granted amnesty by Donald Trump.
“It would also mean that Trump has renewed Obama’s lawless grant of amnesty for 83,630 illegals. But renewals, at least for a time, I can understand—the orgy of sob stories that would result from ending the work permits of some three-quarters of a million people would be a wonder to behold.
“Though I was initially skeptical, it might even make sense to try to trade a real, lawful amnesty for the DACAs in exchange for important immigration changes only Congress can pass—specifically, universal E-Verify and cuts in legal immigration. In that case, announcing that renewals would continue until, say, the end of the year could be a powerful motivator for congressional Democrats.
“But issuing new work permits to illegals who don’t have them already makes no sense at all, either from a P.R. perspective or politically. My speculation is that the White House has no idea what to do about DACA and so is just letting it continue on autopilot—amnestying 192 new illegals a day.”