You are here: Home Americas
Further evidence of the Trump administration U-turn on its election promises of a crackdown on the illegal immigration invasion of America has come with an announcement by Department of Homeland Security Secretary John F. Kelly that he will continue to protect 1.3 million illegals granted temporary amnesty by the Bush and Obama administrations. 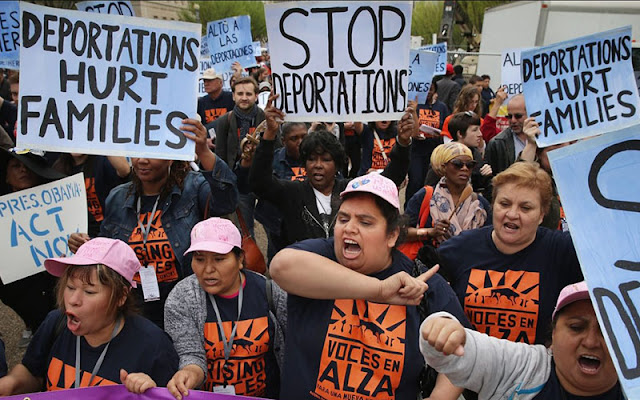 Testifying before Congress, Kelly also said he could not expel another 250,000 “immigrants” from Central American countries who have been in the U.S. via a “temporary humanitarian relief program.”
Kelly told Congress that he would continue to protect at least 780,000 so-called “dreamers” from deportation and expressed the hope that Congress would grant them permanent status.
“You’ve got to solve this problem,” Kelly told the House Homeland Security Committee when members prodded him not to deport “dreamers.”
Kelly said that he would not deport the “dreamers” but warned that the policy could change when someone else takes over his job, making the only solution congressional action. He added that there was “clear bipartisan support for some form of permanent legalization” and urged lawmakers to take the opportunity that the Trump administration was giving them.
If lawmakers wait, he warned, a future secretary might take a stricter line on Dreamers and fully cancel President Obama’s 2012 amnesty, known as DACA.
Under DACA, illegal immigrants who came to the U.S. as children and who have kept a relatively clean record, were 30 or younger as of 2012 and who have worked toward a high school diploma are granted a renewable stay of deportation, along with a work permit entitling them to hold jobs, get a driver’s license and obtain some taxpayer benefits.
Kelly said that the 250,000 “migrants” from El Salvador, Honduras and Nicaragua who have been protected from deportation under “temporary protected status”—a program designed to make sure people don’t have to go back home to countries which have suffered natural disasters.
The earthquakes and hurricanes that granted the protected status are well in the past, but the Bush and Obama administrations renewed the program. “Immigrants” from ten countries are covered by temporary protected status. Kelly recently renewed Haiti’s designation, even though the last earthquake there was in 2010.
Kelly he would “try to encourage the Haitians to go back eventually,” but for the Central Americans, he said, “it’s kind of hard” to send them back and suggested instead that Congress grant them “a way toward citizenship.”