The controlled media has used kosher conservative news outlet Breitbart’s exaggeration and errors in reporting the invader New Year’s Eve chaos in Dortmund, Germany, to launch a general attack on the true events of the evening—which were first correcty reported in English by the New Observer. 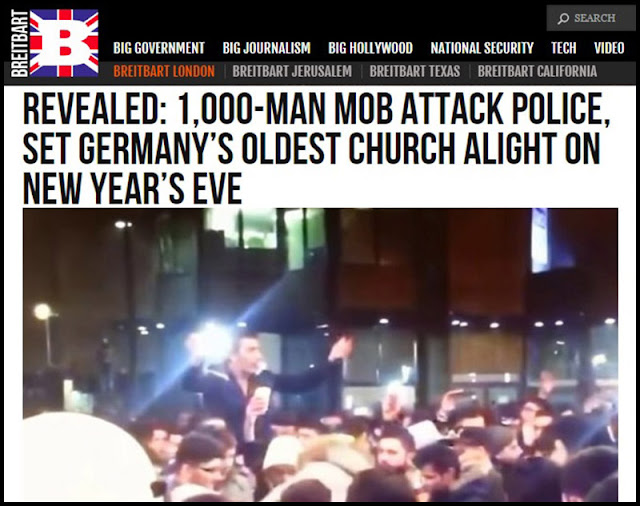 The Breitbart report, titled “Revealed: 1,000-Man Mob Attack Police, Set Germany’s Oldest Church Alight on New Year’s Eve,” claimed that the crowd had consisted of a “group of men chanting ‘Allahu Akhbar’ around the flag of al-Qaeda and Islamic State collaborators, the ‘Free Syrian Army.’”
In reality, as the New Observer originally reported, the flag waved by the crowd shouting ‘Allahu Akhbar’ was a Syrian flag—and the nature of the video made it indeterminate as to whether or not it was an FSA flag.

In addition, the Breitbart report incorrectly said that the church was Germany’s “oldest”— Germany’s oldest church is in fact the cathedral of Trier, which dates from 340 A.D.

Finally, the Breitbart report claimed that the invaders had set fire to the roof of the St. Reinold church.
Actually, as correctly reported by the New Observer, a rocket set fire to the façade surrounding the church steeple, and the blaze was quickly extinguished by the fire brigade.
The rest of the story—that a 1,000-strong invader mob had assembled in the town square, had clashed with police, fired pyrotechnics, behaved “aggressively,” hurled fireworks at policemen, fired pyrotechnics into the crowd, “which included families with children,” and that the evening had ended with a number of arrests—is all completely true.
Nonetheless, the exaggerations and outright inventions by Breitbart has allowed the controlled media to now claim that the entire story is an example of “fake news.”
The Ruhr Nachtirchten—which ironically first reported the disturbances, claimed in an editorial that the “violence, the dangerous use of pyrotechnics, provocations against the police and damage to property which took place on New Year’s Eve in Dortmund was no picnic,” but that “foreign media, and social network users on the Internet have used our online reports for fake news, hatred, and propaganda.”
The facts, the Ruhr Nacthrichten confirmed in its editorial, were as follows:
“Between 18.45 and 01.30 hours, young foreign men in large and small groups gathered in the city center. On the Leedsplatz, they formed a large group consisting of at least 1,000 people. Pyrotechnics were thrown into the crowds and at policemen. At the main station, an unknown person fired a firework at a homeless man and seriously hurt him. The fire brigade had to extinguish a burning scaffolding fence network at the Reinold church.”
The editorial then went on to name Breitbart as misrepresenting the events, and listed a series of social media messages which essentially repeated the Breitbart distortions.
The Local was next to attack Breitbart for its distortions, followed quickly by the U.K.’s far left Guardian newspaper, which announced that Germany’s politicians had warned “against fake news after Breitbart website said group chanting ‘Allahu Akbar’ [had] vandalised [a] church on New Year’s Eve.”
The Breitbart article was published a few hours after the New Observer team had published its correct and fully-reference report of the events. It is possible that Breitbart even lifted the idea of the story from this publication.
However, in an attempt to differentiate its version from the New Observer, it appears that Breitbart added the exaggerations and errors—and thereby opened the door for the controlled media attack.
Whatever the case, errors like that play into the controlled media’s hands. While journalists are human, and can make mistakes, the fact that Breitbart has still, at time of writing, refused to change its factually incorrect report, is only adding fuel to the controlled media’s fire.
The controlled media “outrage” over the Breitbart story is, of course, hypocritical, as the controlled media are the ultimate purveyors of “fake news,” and never apologize or retract their inventions and lies.