Proof that Afghans do not qualify as “refugees” under any circumstances has been proven once again with the news that even ultra-soft touch Germany is busy deporting those nationals back home, despite domestic pro-invasion protests. 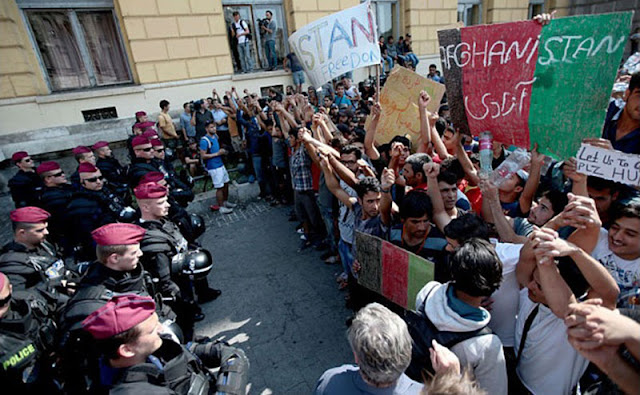 According to an interview with Jutta Cordt, the newly-appointed head of the Federal Office for Migration and Refugees (BAMF), published in last week’s edition of the Passauer Neue Presse, the move to send back Afghan fakers is going ahead.
“The federal government is of the opinion that the repatriation to Afghanistan must be carried out responsibly, but consistently and consistently,” Cordt told the newspaper.
“There are areas in Afghanistan that are considered relatively safe. There are domestic escape alternatives,” she said, referring to the fact that it was not necessary for Afghans to “flee” their country at all, and that all who claim to do so are lying.
Cordt said that her office took into consideration the security situation and the “target-related deportation obstacles” in each individual case, but pointed out that in 2016, “more than 3,000 people voluntarily returned” to Afghanistan, indicating that the country was in fact safe.
Cordt’s opinion faces considerable opposition from pro-invasion forces within Germany. At least five state governments—in Schleswig-Holstein, Berlin, Bremen, Lower Saxony, and Rhineland-Palatinate—have all refused to turn over their Afghan swindlers for deportation, claiming that Afghanistan is not safe for them to return.
The German government concluded an agreement with Afghanistan in October 2016, whereby that nation agreed to take back all its nationals who had invaded Germany.
Accordingly, the German Ministry of the Interior had asked the federal states to start systematically deporting “rejected asylum seekers,” a process which had started in December 2016.
At the same time, hundreds of local authorities in Germany have warned the central government that a failure to deport all the “failed asylum seekers” will create a €3 billion bill in the current financial year.
Chief executive of the Association of Towns and Municipalities, Gerd Landsberg, was quoted in the Rheinische Post newspaper as warning that if nothing changes soon, then during the 2017 financial year, the local authorities will be forced to pay for the living costs of at least 450,000 people who have no right to live in Germany.
Landsberg revealed that there had only been some 80,000 “repatriations” carried out the previous year (2016), which, compared to the influx of over 1.4 million, was “much too small.”
The municipalities have therefore formally requested the Federal Government and the states to “significantly increase the number of repatriations,” he added.
It was also revealed that the central government has also ordered local authorities to start fingerprinting all invaders under their care. This move—clearly designed to try and bring nonwhite invader crime and benefits swindling under control—has however caused extra financial burdens for the local authorities.
Currently, more than 90 percent of local authorities responsible for providing accommodation and services to the nonwhite invasion force in Germany, are not able to cross-check the swindlers’ fingerprints, which means that multiple registrations and fake identities are easily possible.