At least 29,796 nonwhites pretending to be refugees have invaded Europe in the first 79 days of 2017, with most having been carried to Europe by EU naval ships. 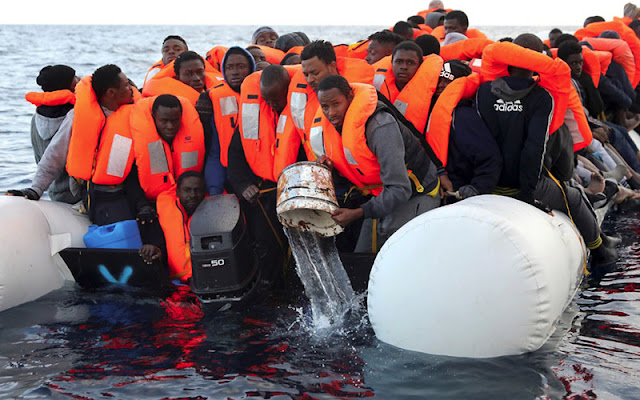 According to the United Nation’s International Organization for Migration (IOM) website, at least 20,484 invaders had landed in Europe by March 19, but that figure did not include 3,312 more who had been “rescued” on March 19.
In addition, a further 6,000 invaders had been “rescued on the central Mediterranean route from Libya to Italy” by March 21, another IOM statement said.
The increase—described as larger than in any previous comparative time period—is ascribed to the knowledge among the invaders that they no longer have to cross the Mediterranean Sea on their rickety boats.
Instead, all they have to do is set sail from Libya, and EU naval units will pick them up within 50 miles of the Libyan coast and transport them to Italy without further risk.
“We have yet to complete March, and we are already racing at a pace of arrivals that has exceeded anything we’ve seen before in the Mediterranean. This is typical of spring, getting very busy,” IOM spokesman Joel Millman told a news briefing.
“But it’s not typical to have the numbers be so high this early.”
Over 80 percent of the invaders were landed in Italy, and the rest in Spain and Greece.
The growing number of invaders brings the year’s total for Italy alone to just on 20,000—considerably ahead of 2015’s first three-month total of 10,165, and even well ahead of the 2016 three-month total of 18,777.
According to the IOM’s “Arrivals to Europe” information service, the main nationalities of the invaders are, in descendant order:
To Italy: Ivory Coast, Guinea, Nigeria, Senegal, Gambia (January 2017).
Nigeria, Eritrea, Guinea, Ivory Coast, Gambia (January – December 2016).
To Greece: Syria, Algeria, Republic of Congo, Iraq, Kuwait (January 2017).
Syria, Afghanistan, Iraq, Pakistan, Iran (January – December 2016).
To Bulgaria: Afghanistan, Syria, Iran, Pakistan, Iraq (January 2017).
Afghanistan, Iraq, Syria, Pakistan, Iran (January – December 2016).
Hungary: On the period from March 13–19, four invaders were registered in Hungary, a 71 percent decrease from the previous period (14 registered arrivals, from March 6 to March 12).