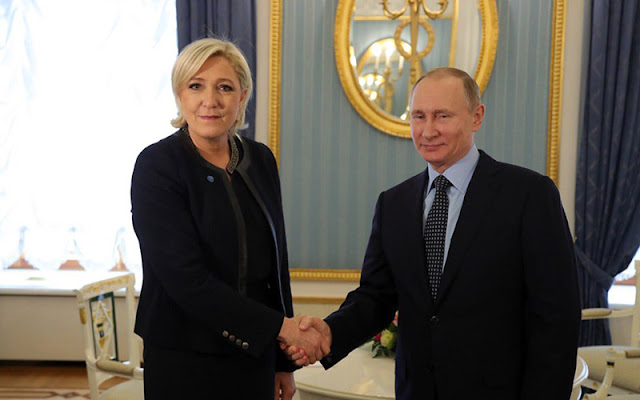 Writing on her Facebook page, Le Pen said she had, “among other things,” discussed “the international situation and Islamist terrorism” with President Putin.
She added that she had also spoken to Putin about the “fate of the Christians of the East, threatened every day by Islamic fundamentalists.”
For his part, Putin told Le Pen that his government “by no means wants to influence the current events, but we reserve the right to communicate with all representatives of all political forces of the country, as do our partners in Europe and the United States.”
Speaking after her meeting with Russia’s parliamentary speaker, Vyacheslav Volodin, in the Kremlin, Le Pen called for greater cooperation against terrorism and better relations with Russia.
“I am in favor of developing relations with Russia in the context of the long history that links our two countries.”
Referring to Russia’s role in Syria, and France’s fight against Islamic extremists, she called on the two countries to work together to fight “terrorism.” She also urged an end to European Union sanctions on Russia over the crisis in the Ukraine.
Le Pen was visiting Moscow at the invitation of Leonid Slutsky, head of the Duma’s foreign affairs committee.
In a later interview with the RT news service, Le Pen told that agency that there was “no good reason for France to engage in a Cold War-style policy against Russia,” and that if elected French president, she would seek balanced relations both with Russia and the U.S.
“I don’t see any good reason to engage in a Cold War in any form. Russia as well as the U.S. is a great power. It’s very important for France to build up balanced relations with both of these countries. I think we could do that with Vladimir Putin and Donald Trump,” Le Pen said.
“I believe France shouldn’t put limits on itself when it comes to improving relations with Russia. First of all, we should lift the sanctions [against Russia] that actually have been forced upon us by the European Union.”
Le Pen’s visit comes just days after Germany’s Alternative für Deutschland (AfD) leader Frauke Petry visited Moscow.
On her Facebook page, Petry said that she had gone there at the invitation of the regional government, and had had talks about “cooperation with the German state governments.”
In addition, she said, she met with Duma Chairman Vyacheslav Volodin, his deputy Pyotr Tolstoy, as well as other members of the Duma, or Russian parliament.
Joining Volodin and Tolstoy was Pavel Navalny, all of whom are members of the pro-Putin United Russia party. Navalny is in charge of energy issues and is the head of a contact group for cooperation with the German parliament.
MPs from the populist “Political party LDPR” (formerly known as the Liberal Democratic Party of Russia) and its famous outspoken leader, Vladimir Zhirinovsky, also attended the meeting.
Like Le Pen, Petry’s visit comes only a short time before the start of a series of elections in Germany in which the AfD is expecting to make gains. The elections start with Saarland’s state elections at the end of March, followed by Schleswig-Holstein and North Rhine-Westphalia in May.
Polls are predicting that the AfD will gain enough support to be represented in all three state governments, as well as in the federal parliament following the federal election in September.
Recent surveys have put the AfD as the third-strongest party nationwide, with approval ratings of 10 to 12 percent.
In December 2016, Austrian Freedom Party (FPÖ) leader H. C. Strache signed a five-year cooperation agreement with the United Russia party while on a visit to Moscow. Media reports at the time said its main purpose was to “educate the younger generation in the spirit of patriotism.”