Donald Trump’s speech this week in West Palm Beach, Florida, in which he said that Hilary Clinton “meets in secret with international banks to plot the destruction of U.S. sovereignty in order to enrich these global financial powers, her special interest friends and her donors,” has been condemned as “anti-Semitic” by the Anti-Defamation League and other Jewish organizations—although he didn’t mention Jews at all. 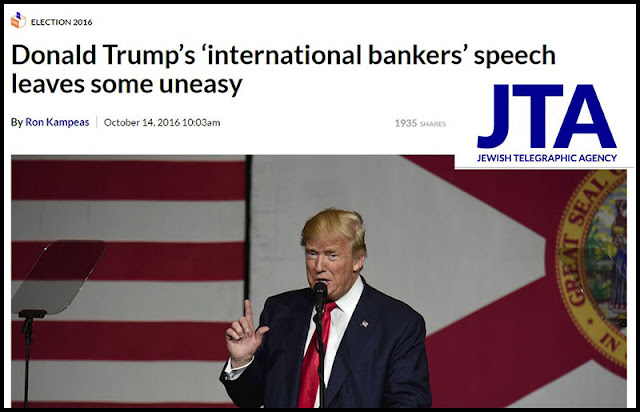 The Jewish Telegraphic Agency (JTA) reported that “Donald Trump’s star, blunted into a circle, may just have re-sprouted six corners,”—referring in part to an earlier report they carried in which they quite falsely claimed that Trump had tweeted a Star of David symbol saying that Clinton was the most corrupt candidate ever.
The JTA went on to admit that Trump “never mentioned Jews in his prepared text, which he read from teleprompters with some extemporization,” but that merely referring to “a vast conspiracy involving scads of money and ‘international banks,’” he was entering a territory “where hostility to Jews perpetuates and thrives even in their absence.”
The part that got the Jews upset—because they immediately saw it as a reference to themselves, reads as follows:
“Hillary Clinton meets in secret with international banks to plot the destruction of U.S. sovereignty in order to enrich these global financial powers, her special interest friends and her donors.”
This quote was, said the JTA, “evidently key” and retweeted by his campaign team. 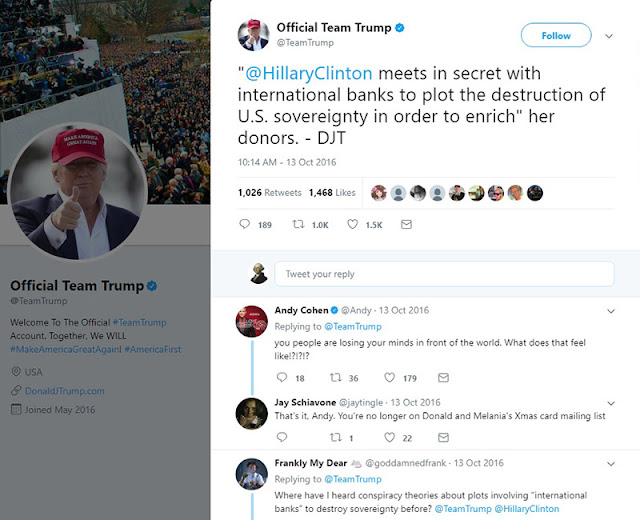 Trump went on to declare that this “election will determine if we are a free nation or whether we have only the illusion of democracy, but are in fact controlled by a small handful of global special interests rigging the system, and our system is rigged,” he said.
“Our corrupt political establishment, that is the greatest power behind the efforts at radical globalization and the disenfranchisement of working people. Their financial resources are virtually unlimited, their political resources are unlimited, their media resources are unmatched.”
First out of the stalls to self-identify these comments as referring to Jews was the Anti-Defamation League’s Jonathan Greenblatt.

In a tweet on the topic, Greenblatt said “TeamTrump should avoid rhetoric and tropes that historically have been used against Jews and still spur anti-Semitism. Let’s keep hate out of campaign.”
Next to identify the comments as “anti-Semitic” was Jewish journalist Julia Ioffe—who had earlier penned a lie-filled smear article on Trump’s wife Melania in GQ magazine.
“Is it just me or is much of this Trump speech Jew-baiting?” Ioffe tweeted. Next up was the Jew Ari Ratner, a fellow at the New America think tank, who posted a side-by-side comparison of Trump’s speech and Adolf Hitler’s declaration of war against America.
The JTA article went to compare parts of Trump’s speech with extracts from the Protocols of Zion, trying to imply that he had somehow taken the basis of his speech from that document.
Trump’s Jewish chief legal officer and campaign aide on Jewish affairs, Jason Greenblatt (no relation to the ADL chief) denied that there was any anti-Semitic content to Trump’s speech.
“Jonathan Greenblatt is trying to connect the hatred and bigotry of some despicable individuals with the movement to Make America Great Again that Mr. Trump is leading. Note that, in his recent comments, Jonathan Greenblatt did not dispute Mr. Trump’s description that Secretary Clinton is at the heart of a global power structure that has stripped the United States of its wealth to line the pockets of corporate and political interests.”
Trump’s counsel added: “Jonathan Greenblatt is merely trying to divert the attention of the voters away from these facts by fabricating connections to anti-Semitism. Jonathan Greenblatt seems to be willing to ignore Mr. Trump’s lifelong commitment and support of Israel and the Jewish community, as well as his forceful rebuke of anti-Semitism, but Mr. Trump will not allow anyone to hide the truth from the American people, no matter what illegitimate means they employ to try to do so.”