You are here: Home All News
The backward mentality which drives the anti-white movement is identical to that which drives the radical Islamist ISIS—as so clearly demonstrated yesterday in Durham, North Carolina, when a mob of anti-white thugs topped a statue in exactly the same way that ISIS lunatics destroy history in the name of their ideology. 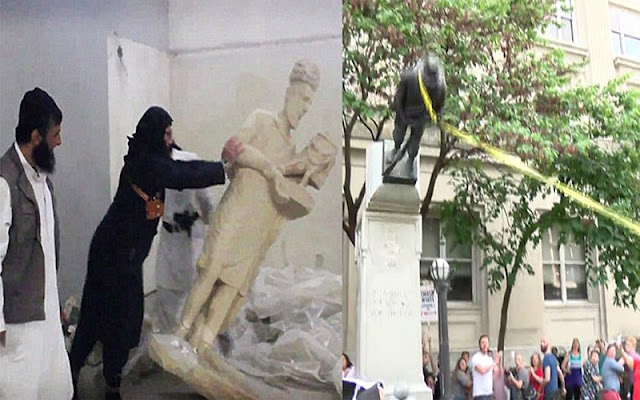 Demonstrators looped a rope around the bronze soldier Monday evening and pulled it down to the ground. Many spat on the statue, kicked it and proudly posed with the downed monument.
Durham’s statue was perched on a granite tower with the inscription dedicated to “the boys who wore the gray” outside the former Durham County Courthouse in 1924.
The courthouse is the jurisdiction of the Durham County Sheriff’s Office, but they refused to intervene, and merely recorded the action.
Groups involved included members of the Triangle People’s Assembly, Workers World Party, Industrial Workers of the World, Democratic Socialists of America and the Anti-fa movement.
The behavior—and motivation—is identical to that of ISIS, who destroyed statues and sculptures “because they are not Muslim” in Iraq and Syria.
In both cases, the motivation is identical: hate for others, and a desire to obliterate history, no matter what it might be. It is the actions of small-minded haters, who feel and behave exactly as they accuse white people of doing.